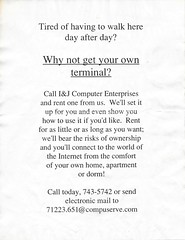 In the dorms [at Purdue] we had these things called DOV (pronounced “dove”) units, which stood for “data over voice.” It was like pre-DSL, but serial and only went up to 9600bps (I think, could be less). Personal computers weren’t a rare thing at the time, but they also weren’t nearly as ubiquitous as they are today (obviously). Ian saw this as a market. We tried buying old text terminals at the Purdue surplus store and then renting them to students so they could work in the privacy of their own dorms without having to trudge all the way to a lab. I don’t think we ever had any customers, but I’m pretty sure I still owe him money over that (he bought the first terminals, I was supposed to go halvsies).

I had forgotten all about this. As it happens, I found some old flyers for our venture, I&J Computer Enterprises, in that old box (along with the other things, with more on the way). This would have been from either late 1992 or early 1993, more than likely before I found the lab of X terminals in the ENAD building and, thus, also more than likely before I found Linux.

I’m pretty sure Jason is right that we never had any customers. I also think we only ever bought one terminal, which I vaguely recall was an ADM 5.

I’m also pretty sure Jason is right that he still owes me money, now that I think about it…